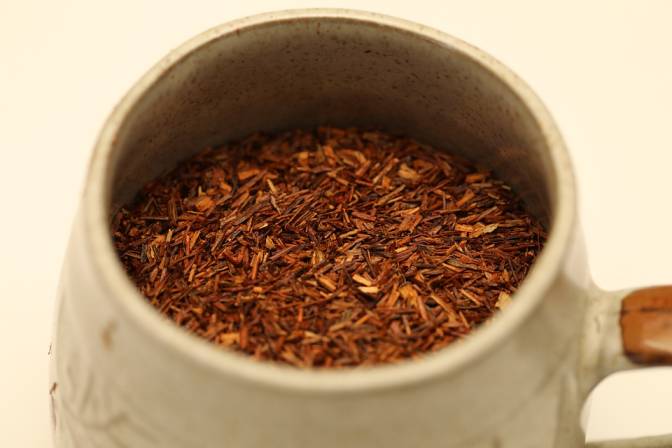 Every day the conclusion of the health benefits from drinking rooibos tea grows stronger. Rooibos tea, also known as red tea or redbush tea contains high levels of several antioxidants. Unlike real tea, rooibos does not contain caffeine. The species have been researched since the 1930’s. Since then we came to understand a lot about this plant.

What is the history of rooibos tea?

The tea is used for thousands of years in southern Africa for skin problems. The Khoisan people started using the leaves from the Aspalathus Linearis plant for various ailments. The tea is also loved due to this it’s great aromatic taste.

Fast forward to 1904 Benjamin Ginsberg commercialized the then so called mountain tea. The tea became even more popular and started to gain traction in europe. However it was still being farmed at a small scale.

Later, around the 1930's, the tea was being researched for the first time for it’s agricultural potential. The research created a new method of cultivating the seeds of rooibos.

The real commercial breakthrough came later. Starting in 1968 when a story of a african mother struggling with an allergic infant became big news. The rooibos did wonders to the infant and the mother wrote a book with her story. Studies on rooibos were done in big numbers and the popularity of the tea exploded, especially  in south africa.

In the 1990’s the production of green rooibos tea started. Which is an unfermented form of the plant.

What are the health benefits of rooibos tea, redbush tea, red tea?

Rooibos tea is a herbal tea and therefore has no caffeine. It also contains no tannins like green or black tea which gives it a less bitter taste. Rooibos has little no nutritional value. One cup of rooibos tea contains:

There are some amounts of minerals found in the herbal tea. However the most important factor of rooibos is having antioxidants. Which gives it the health benefits when drinking.

The herbal tea is abundant in flavonoids, however unlike other teas the main flavonoids are Aspalathin and Nothofagin. These have a stronger anti-oxidative effect than other flavonoids. Oxidative stress can induce the effect of inflammation and therefore the anti-inflammation effect of rooibos tea where researched.

The ant-oxidational effect on the body by consuming the herbal tea creates an anti-inflammatory effect. Even more evidence was found in the research of the rooibos tea in combination with palm oil.

It is shown to have a great potential in cardiac-protection and anti-inflammatory.

Due to the lack of caffeine and calories in the beverage it is a good option if you are trying to lose weight. With increasing leptin by drinking rooibos you may benefit from the effects which manage your weight. Especially for Keto or Paleo lifestyle choices.

Rooibos has an amazing taste. Because the herbal tea has a less bitter taste than others you could find yourself enjoying a cup of rooibos tea while losing weight.

It is shown in research that inflammatory creation dysfunctional fat. Which causes the body to have harder problems losing weight.

Improves and maintains the health of your skin

Research conducted over the years introduced the anti-aging effects the rooibos possesses. The herbal tea has a positive effect on your aging cells by both fermented and green rooibos. The antioxidants have a protective property that prevent damage to the cells by severe oxidative stress.

Aging processes affect the way fat is distributed in your body. For example the fat in around your eyes becomes less which creates the wrinkles. Research has shown that protecting the cells from stress slows this proces down.

In other words drinking rooibos may have a strong positive effect on your aging process.

Study has shown that on healthy volunteers ACE activity levels dropped. ACE (Angiotensin-converting enzyme) is the central component of a system that controls blood pressure. With a high level ACE activity symptoms may show up causing all kinds of health problems. Rooibos may introduce inhibition of ACE activity levels. Creating a healthy effect on your body.

Rooibos is a great resource for ant-antioxidants. This led to many years of research on the effect of rooibos on cancer. It has already proven itself with the prevention of skin, liver and oesophagus cancers in animals.

It’s amazing antioxidants fight free radicals that contribute to heart disease. Include the positive effect on blood pressure making the herbal tea possibly have a great impact on the reduction of heart problems.

Having summarized all these health benefits of rooibos tea it all concludes towards an implication of beneficial effects on fighting strokes.

Effective on preventing or managing diabetes

Redbush tea benefits help control diabetes by drinking the tea. Here is a list how red tea (rooibos) may help:

Drinking tea has the antioxidants and properties to decrease levels of ACE activity. These levels are central to controlling blood pressure in your body. Having too high levels has a negative effect on your body.

Benefits of red tea for hair

Rooibos has been researched with positive results on hair loss. The regular consumption of red tea would increase the growth of hair and strengthen its roots. The tea is enriched with minerals like zinc, calcium and copper that promote health for your hair, scalp and even fight dandruff.

One of the prominent functions of your kidneys is detoxification. Removing acids that aren’t created by your cells and create a good balance within your body. When not in balance could implicate problems. Rooibos tea has diuretic and anti-inflammatory properties making it a stimulant to extract toxic acids from your body.

Rooibos as a supplement for fitness

Rooibos as a supplement in sports and fitness is not far fetched. The tea, just like black tea and green tea, have positive cardiovascular effects on your blood pressure and blood circulation. It is even suggested to be used in pre-workouts to decrease stress levels.

Redbush tea as a stress reliever and to fight hypertension has been researched with positive results. As with many other health benefits from rooibos most of it comes from increased reactive oxygen species (ROS).

The body produces free radicals and other reactive oxygen species. Studies showed that long term exposure to physiological or psychological stress is associated with the production of these species. Rooibos has a positive effect on cortisol which is related to stress. This makes the herbal tea a great stress reliever and has a soothing effect on humans.

Rooibos is not proven to reduce or prevent allergies with humans. However research has shown positive results regarding the boosting the production of Cytochrome P450. This is an enzyme which is very important in fighting metabolic allergens.

Rooibos tea also contains antispasmodics which can relieve stomach pain. So in conclusion the tea has a very soothing effect on the stomach.

The consumption of rooibos supplements the recommended daily allowance of calcium, manganese and especially fluoride, essential for the development of strong teeth and bones.

A better alternative for regular tea

Rooibos tea is in many ways a better option than regular tea. With many benefits for health and mind the tea is also caffeine free. Making it a better option before bed-time. Also having a possible effect on fitness it can be consumed pre-workout.

The tea lacks properties that make regular tea have a bitter taste. This makes the consumption of rooibos tea a nicer experience for people who are trying to lose weight otherwise do not like to drink regular tea without sugar due to its bitter taste.